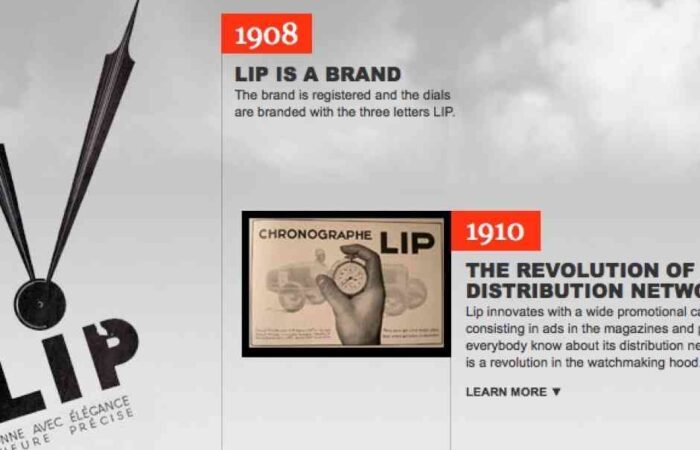 A History of Lip Watches

Lip watches are a French brand with a great deal of history and some fantastic designs. The designs stand out for both encapsulating and representing the best style of a period and yet also so elegantly designed that they are timeless and stylish to wear today.
We have picked out some of our favourite watches here and we also present a short history of this excellent brand.

Emmanuel Lipmann started Lip watches at 23 years old as a clock workshop in Besancon. The “trading post Lipmann” hired 15 employees and was located at 14 of the Grand Rue.

Lip watches were the first to use phosphorescent dials so that the hands and numbers would glow in the dark.
Emmanuel asked Pierre and Marie Curie to find a material that will allow someone to read a watch in any light. Since they had discovered radium properties in 1898, they came up with the first phosphorescent dials for Lip watches. A huge first for the watch industry, even though Radium was not an ideal material to be worn on the wrist. No watches today use Radium anymore for obvious reasons.
In 1905 Fred Lip was born, the grandson of Emmanuel Lipman, he was originally regarded as a bit of an academic failure and after a course at the watchmaking school in Besancon was sent off to America in 1928. There he studied manufacturing processes at Harley Davidson where he developed a passion for motorsports that would later influence his watchmaking designs.

It appears that opinion was divided as to whether he was mad or a genius, generally the sign of someone who is talented but erratic. He was soon nicknamed “the Fred” and set about innovating in the watch industry and becoming the first watchmaker in France.

In 1908 Lip was registered as a watch brand and the dials marked with the Lip logo of the three letters LIP. Much like Apple Mac today Lip watches were marketed internationally through representatives and the price rigidly controlled with an international guarantee.

In 1934 Lip was the first company in France to give paid holidays to its employees. This really was a company that innovated.

In 1935 Lip equip the “Croix du Sud: the famous plane flown by the equally famous aviator Jean Mermoz. These onboard watches are known as Type 10 or as the Lip T10 Mermoz today and it is a beauty.

In 1949 Lip gave the time on French TV station RTL. At the Liberation of France after the war, Lip advertising campaigns started again with the catch phrase “watchmakers in Besancon since 1867”.