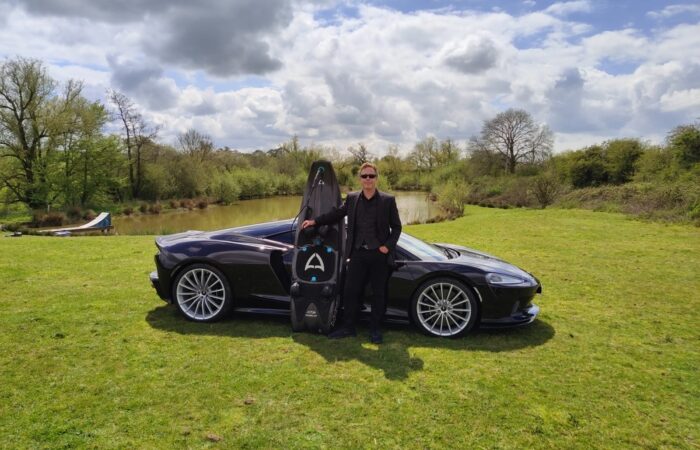 Jet boarding has rapidly become the motorised water-sport everyone wants to get in on. Jet Boards have everything you need to power across the water in one neat portable package. Jet boards are essentially surf boards with a built in propulsion system, either petrol or electric.

I love nothing better than to tear across the sea in a luxury powerboat or water ski over the waves, but it’s not always easy to get your hands on a decent speedboat and in the case of water skiing, a proficient driver. Surfing is fantastic, but it does need two things in short supply, years of practice and long rolling waves of a good size.

Jet boards cut right through all this to give you the best of all worlds and the Mako Slingshot jet board is reputed to be one of the best.

So I visited the Make Jet Board company down in Wiltshire while touring in the new Mclaren GT supercar to combine my two favourite things. Supercar travel and adventure water-sports.

Mako Board Sports is a British company founded by our version of Tony Stark, engineer genius Gilo Cardoza. He started out inventing and designing a Wankel engine that uses a revolutionary rotary design to power a paramotor flight over Mount Everest in 2007.

TV personality Bear Grylls and Gilo used this Rotron engine to set a new altitude record reaching a height of 8,990 metres. They set off from the Himalayan village of Pheriche at an altitude of 4,400 metres and endured temperatures of minus 60C.

Bear Grylls
“It was so amazing to look into Nepal, India and Tibet and all of a sudden these great Himalayan giants looked so tiny. It was a very special moment when I realised that there was no mountain in the world above me.”

Gilo has applied the same adventure spirit and engineering skills to the board design, motor and shape of the Mako Slingshot.

When you first enter the Mako factory, set in a series of barns near Shaftsbury in Dorset, you walk into engineering heaven. The engines, boards and quite a few other tremendously exciting projects are developed here. Imagine Willy Wonka’s Chocolate Factory for adventure sports enthusiasts. Think Mclaren Technology Centre (apologies to my McLaren GT outside) fused with Hamleys Toy Shop only for grown-ups.

There are flying cars suspended from the ceiling, Parajet Motors (motorised paragliders) with huge fan blades sat in every nook and cranny. Parts of engines in various states of construction scattered in different corners and Mako Slingshot jet boards neatly stacked in rows upon rows of shelves.

The place is immaculate for a working factory, all is pristine and beautifully laid out. The decor and atmosphere are more creative agency than a manufacturing works with travel posters of glamourous locations depicting the flying and surfing technology covering the walls.

I survey this engineering paradise from the first-floor balcony and cannot wait to inspect the Mako boards. An engineer is assembling one as I descend the stairs so I admire the internal engine and workings as he talks me through the specifications.

The Mako Slingshot has the best shape and silhouette of any jet board out there, no question. It is curved, muscular and made from high-grade carbon fibre, much like a McLaren. It’s lightweight too, essential for carrying it to the water and for long surfs without getting tired. It weighs 20 Kg including the engine. It will cruise for an hour and a half before needing to refuel and has a top speed of 24 mph or 55 kph.

The board is sleek, sculptural and beguiling, something you want to own even for its looks. Store it on a living room wall as a work of art when not in use.

The spark plugs are easy to change in two minutes, you should carry a spare pair in case they get wet whilst learning. Keep a spare can of gas in the car and refill whenever you want to surf all day. You could easily surf from Marina to Marina in the Mediterranean and refill at each stop. That would be a heck of a trip.

After the magnificent tour of the separate factories we drove over to a nearby lake, the board fits neatly into the back of the McLaren GT, and got ready for my first jet board outing. The lake was around 30 metres long so I needed to not only get up fast but learn to turn pretty sharpish. The first few minutes were dicey as I thought I’d never stay up and then someone suggested putting my back foot in the straps first before standing and suddenly with this tiny change I was up.

Turning is a breeze, hold onto the power control chord and lean into the curve while adding some throttle. In twenty minutes I was surfing like a pro, sailing around the distinctly boutique lake consistently, without falling. We even had fun faking some high speed falls for the camera as I was now so stable.

The Mako jet board is like water skiing, surfing and jet skis all rolled into one. I am a water ski fanatic but this is so much more convenient. Absolutely the most thrilling and accessible water-sport ever. Surfing without the need for waves. Take it anywhere and turn the nearest lake or coastal bay into a surfing paradise.

If you’re going to Spain, Dorset, Miami or the Maldives, pop your jet board in the hold or the boot of the car and voila, your own water-sports centre on every beach.

The singer James Blunt and Joe Wicks, the body coach, are big fans of the Mako Slingshot and you can add me to that list.

Where else could you learn to surf, a sport that usually takes years to master, in 30 minutes? Take the board out and cut a bottom turn, 360, snap, cutback, tube ride, air and foam climb with ease. Or just cruise stylishly to the nearest beach bar and share the board with friends, in exchange for a cocktail or two. And it fits in the boot of a McLaren GT.

With the words of the Suzuki PR guy ringing in my ears “real men ride...

Our test car was the Citroen C5 Aircross Flair+. To help to keep you and your...

A luxury selection of jewellery for this summer from the finest established and up and...